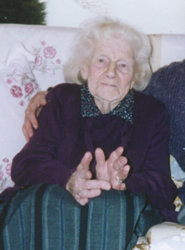 Jenny (formerly Jenny Warburton) was born in 1916 and moved from Holywell to Narrow Lane, Calcoed with her parents when she was 2 years old. She lived in the area all her life and here are some of her recollections.

The headmaster was Mr John Brookes-Jones who, by all accounts, was quite distant with both pupils and their parents so as not to show any favouritism.
The old school (currently the church hall) had 2 rooms and one of these was occupied by the infants and standards 1+2 who were taught by Daisy Jones. Standards 3+4 were taught by Miss Eluned Jones and Mr Brookes-Jones taught standards 5, 6 and 7 in the other room.

Children from as far away as Babell walked to school and were expected to arrive by 9 am and any latecomers were often caned by the headmaster. The school was heated by a coke stove which made the classroom rather smoky and on wet days steam would rise from the children’s drying clothes. School dinners were not provided and so Jenny’s mum would make bread and milk(or buttermilk if they were lucky!) for Jenny and her 3 brothers. In the summer they would meet for lunch on the mountain. 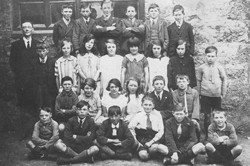 After the age of 11, the girls would walk to Perth y Terfyn in Holywell every Friday where they would receive cookery lessons from Miss Lloyd of Mold. The boys walked to the same venue on a Wednesday for joinery lessons with Mr Rhys Jones.
Jenny is pictured here on the 2nd row, 2nd from the left.

There was no mains water in Calcoed. Every morning, the women would fetch water from a well behind the Old Offices* on the mountain. Jenny’s father also made a tank to catch rain water. In the 1930’s 3 standpipes were introduced in Calcoed : on the Main Road, Narrow Lane and near Flaxfield. The situation in Brynford is somewhat unclear but there is an old standpipe outside Bryn Sannan Cottage. Mains water pipelines direct to most premises quickly followed. Mains electricity was introduced in about 1952.

*The Old Offices(originally used for the lead mines) were a row of cottages near Calcoed which became derelict and were then converted into houses by Mr Atkinson.
Shops
*Jenny always remembers Brynford post office and general stores which was established just after the first world war.
*Mr and Mrs Roberts sold groceries at Claremont but then moved to Erw Wen in 1951 where they continued with the business.Their daughter Mrs E Barnes and her husband took over the shop from 1969 until 1980.
*Tommy Edwards sold coal and groceries from his house on the mountain near Brynford crossroads.
* Just after the second world war there was a cafe at The Gables, Bryn Sannan.
* Miss Price sold bread and paraffin from one of the two cottages where Fairview currently stands next to Calcoed Chapel.
*Mr Edwards had a butcher’s shop at Trigfa (next to the chapel), Calcoed.

Holywell golf club was established in 1906. The course used to stretch as far as Naid y March where a bell was rung to warn people if a ball was likely to go over the bank. The Everton football team would play here regularly for relaxation in the 1950’s.